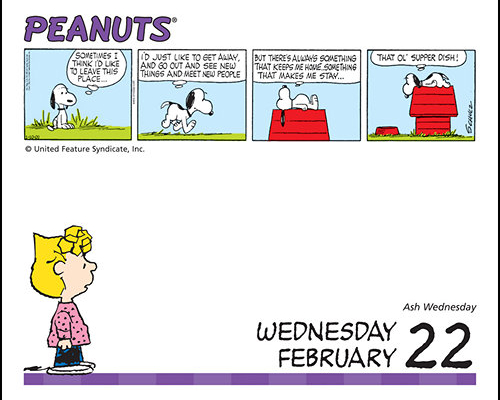 Charles Schultz introduced the world to Snoopy and his friends in 1950. Of course the main character is the owner of this funny beagle, Charlie Brown but often times good old Snoopy would steal the show. To be precise: on October 2, 1950 this now famous comic strip made its debut in 9 American newspapers as a daily feature in the funny papers. Snoopy first appeared on October 4, 1950 which was the third strip in the papers. Many of the characters that became main characters did not start to appear until 1951. There was a Patty in the very first strip for instance, but it was not Peppermint Patty until 1966. Similarly, Lucy Van Pelt  did not make her first appearance until 1952.

Everybody loves Snoopy, don’t they? Snoopy and friends, aka the Peanuts are a favorite cartoon of millions of people world wide. Kids and dogs, making stupid mistakes and caring… What more can you want to lighten up your day at the office?

For the upcoming year, let LINUS, CHARLIE BROWN, SNOOPY, LUCY, SALLY and the rest of the gang help make planning the year easier with this charming new calendar. This daily calendar features a year’s worth of full-color PEANUTS comic strips.

Each page of this little calendar features a full-color PEANUTS character that is guaranteed to bring big smiles. The calendar’s backer has magnets and an easel so it can be displayed on a desk, counter, or fridge. See also the Snoopy weekly family wall calendar.

Schultz stopped creating new strips in 2000 but they are still shown in newspapers around the globe as re-runs. Certainly this delightful group of characters has become a classic with a following that spans over 6 decades.