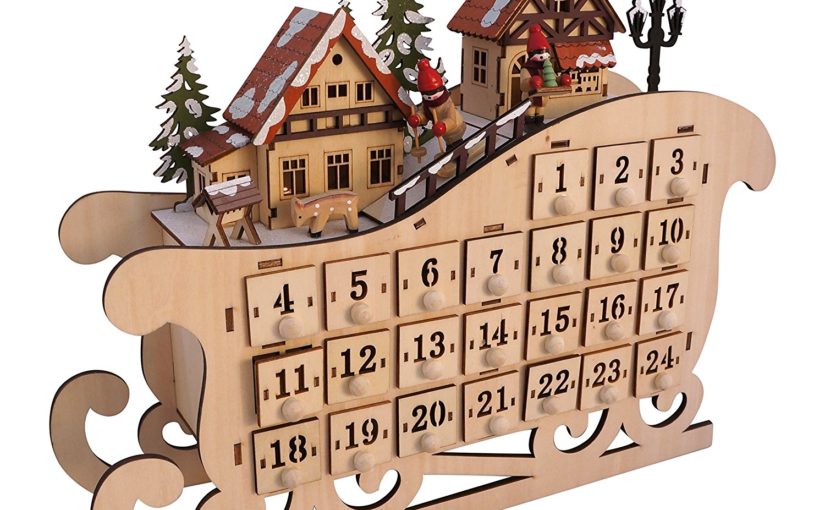 What is the difference between an Advent Calendar and a German Style Advent Calendar? There might not be any depending on the style of the calendar meant to count down the days until Christmas. The Lutherans in Germany are credited for creating the first Advent Calendars. 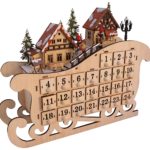 The advent calendar tradition began as far back as the beginning of the 19th century when the Lutherans began to count the days in anticipation of the coming Christmas day. They would begin at the first day of December and count down. So, a German style Advent calendar will be one that is flat and will have windows to open for each day. The windows may have a biblical scene or a bible verse pertaining to Christmas behind the tab. There are not usually “gifts” to find as in more contemporary Advent Calendars. The “gift” is the reminder of the Christmas story in verse or image.

Shown above: Bavarian style Advent Calendar in the shape of a Christmas Sled.

A lovely Victorian style image of a merry-go-round filled with Children. Father Christmas stands in the corner of the scene. A flat calendar with windows to open each of the 24 days of December until Christmas morning. The scene is reminiscent of the style of calendars made in Germany in the late 1800s and early 1900s and sold all over the world.

A Family Townhouse Advent Calendar – in the German style

A festive townhouse wearing its holiday finest is done in the German style of Advent Calendars. It is flat with numbered windows to count down the days until Christmas. Behind each tab there is an image that has a Christmas theme. A red ribbon is attached for easy hanging on a wall where the family can gather each day to open a window.

German Style Advent Calendar with medieval village scene. This old world style village has Santa entering the town. Each of the 24 windows have a Christmas image behind the tab. Measures about 8.25 inches by 12 inches.

Those first German Advent Calendars were all about the Nativity and this Advent Calendar honors that tradition. A Nativity scene with children on a flat calendar. There is no mention as to what is behind the windows to be opened. My guess would be a Bible verse or image of the season.

A little history of Advent Calendars

I mentioned above that the first Advent calendars were made by the German Lutherans back in the 1800s. As the tradition grew to other Protestant and Catholic homes, the calendars were manufactured and sold worldwide. During World War II production was stopped due to the shortage of paper and people to work in the factories. After the war ended, a man named Richard Sellmar who lived in Stuttgart decided to restore the commercial business of Advent Calendars. His company is still in business today and has over 1 million calendars in their inventory line. The company is called Richard Sellmar Verlag Company and they make the traditional German style Advent calendars for families to use to count down the days to Christmas. Their designs are really lovely.