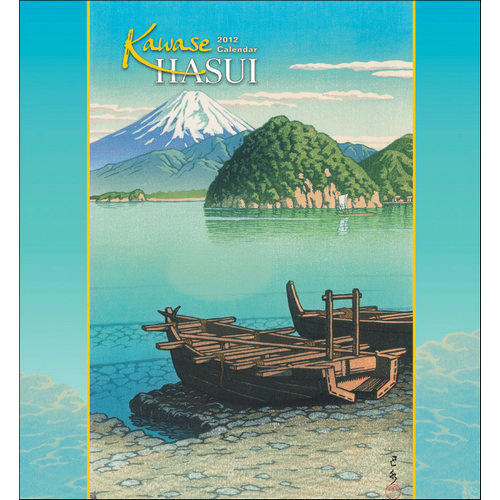 The art of Japanese woodblock prints is fabulous. I don’t know how they get those nuanced colors to combine with the sharp lines and the fascinating shapes. Calendars featuring this art form, usually showing off 19th or early 20th century woodblock prints, are a beautiful addition to any home. Using both soft and bold palettes, the various artists represented here are primarily from the Shin Hanga movement, which signaled a rebirth of the Japanese print in the early twentieth century. The Artists created simple masterpieces, capturing the essence of nature’s perfection.

Woodblock printing was invented in China around the year 200. However it was not adopted in Japan till the 17th century. However, when it did catch on, it became a major force in not only the printing of books, but also art production. The combination of color and clear lines make these pieces of art an enduring legacy often used on woodblock calendars and art planners. 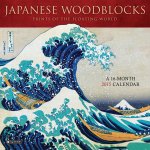 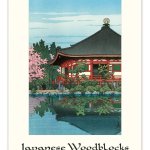 Monthly desk calendar that starts at January 2013 and lasts through December 2013. 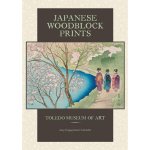 From the Art Gallery of Greater Victoria.

The Japanese artists featured here are mostly from the Shin Hanga movement, which signaled a rebirth of the Japanese print in the early twentieth century. Their simple style feels very modern.

This is perhaps the most colorful calendar on this page. You’ll find familiar classics as well as new favorites. 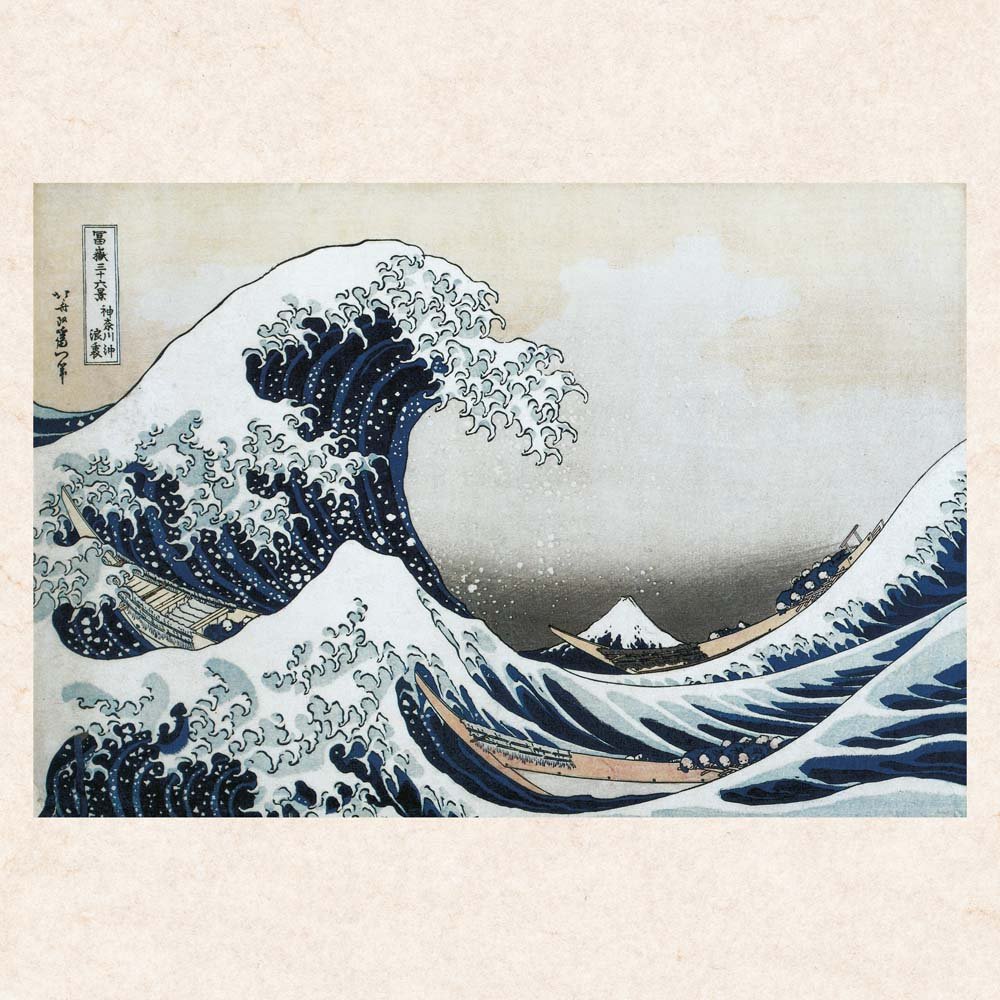 Famous for his 36 views of Mount Fuji, Katsushika Hokusai was the most renowned ukiyo-e painter and print maker of his time.

An eclectic woodblock print artist living at the end of the 18th century, Kitagawa Utamaro is best known for his depictions of women’s faces.

Aggression is absent from most woodblock calendars these days, but not from the prints by Tōshūsai Sharaku. He put a wealth of expression into his subjects. 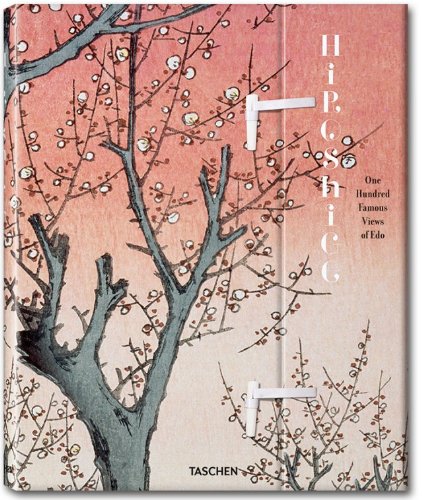 One of the last famous woodblock print artists of Japan, Utagawa Hiroshige created an art that has the stylized, almost abstract, quality we expect from the genre. Hiroshige was one of the last great artists in the ukiyo-e tradition. Though he captured a variety of subjects, his greatest talent was in creating landscapes of his native Edo and his final masterpiece was a series known as “One Hundred Famous Views of Edo”.

Literally meaning “pictures of the floating world”, ukiyo-e refers to the famous Japanese woodblock print genre that originated in the 17th century and is practically synonymous with the Western world’s visual characterization of Japan.

During the Meiji era (1868 – 1912), Japan opened to the West and experienced rapid modernization, and Hashimoto Chikanobu (1838 – 1912) adeptly chronicled the social and political shifts then occurring. A prolific woodblock artist, Chikanobu is best known for his triptychs – where the painting is spread over three canvases.

Discover the “Art of the Floating World” and be transported to Japan’s colorful landscapes, crashing waves, and elegant bridges. Featuring Japanese Woodblock printing masters, this collection of prints dates as far back as 1823.

Born in Gunma prefecture in Japan, Kazuyuki Ohtsu moved to Tokyo at nineteen to study traditional woodblock printmaking. For forty years Ohtsu (b. 1935) served as an assistant to Kiyoshi Saito, a woodblock artist at the forefront of the sosaku hanga (creative print) movement.

Discover the “Art of the Floating World” and be transported to Japan’s colorful landscapes, crashing waves, and elegant bridges. Featuring Japanese Woodblock printing masters, this collection of prints dates as far back as 1823. Elegant rounded corners.

For centuries, Japanese printmakers have used incredible skill, precision, and imagination to create images of lasting beauty. Enjoy a year of ukiyo-e, or “Pictures of the Floating World,” an art form that celebrates pleasure and a love for nature.

From the twelfth century to the nineteenth, Japanese warriors relied on bows and arrows, spears and halberds, even matchlock guns, yet the most characteristic weapon of the time was the sword. The man who bore it was a samurai, his life ruled by a stern code.

Hiroshige was one of the last great artists in the ukiyo-e tradition. Though he captured a variety of subjects, his greatest talent was in creating landscapes of his native Edo and his final masterpiece was a series known as “One Hundred Famous Views of Edo”.

Japan experienced rapid modernization during the Meiji era (1868–1912) as Western customs and technology were adopted. Despite the growth of photography and lithography, Hashimoto Chikanobu (1838–1912) became a successful artist using the time-honored woodblock print.

Japanese scrolls and screen paintings reveal a variety of influences, including Chinese painting and calligraphy, Buddhist iconography, and Japanese literature, and their subjects range from portraits to scenes from mythology, scripture, everyday life, and nature.

Katsushika Hokusai and Utagawa Hiroshige are great 18th- and 19th-century masters of the Japanese woodblock style known as ukiyo-e (oo’-kee-yoh-ay), “pictures of the floating world”.

The Museum of Fine Arts, Boston’s splendid collection of Japanese woodblock prints from Katsushika Hokusai’s and Utagawa Hiroshige’s Thirty-six Views of Mount Fuji and Famous Places in the Sixty-odd Provinces provides the illustrations for this calendar.

The pictures of Utagawa Hiroshige convey a sense of timeless repose even as they capture fleeting seasonal changes. But as a photograph taken today at any place depicted in Hiroshige’s celebrated series would instantly reveal, these scenes are very much of a certain era.

A long time favorite with artists and art lovers, Japanese woodblock prints are as popular now as they were in the 19th century when they inspired artists like Vincent van Gogh.

Their illusive colors, beautiful lines, visions of nature and all round Japanese atmosphere have defined what we think of when we hear the word ‘Zen’.

Calendars featuring these woodblock prints are a great way to get a taste of Japan right in your home.