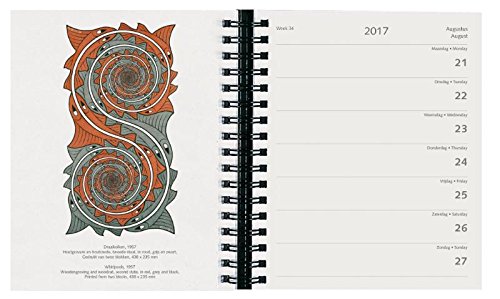 Escher combined detailed artistry, subtle humor, and rigorous attention to the physical behavior of imaginary substances, into graphic worlds whose absurd, impeccably principled physics and rogue geometries mock our perception of space. The result is admired by math enthusiasts as well as artists and the public. I think it’s the symmetry in his work that makes it so popular with ‘ordinary’ people: Escher’s work makes sense to us even as it doesn’t.

Maurits Cornelis Escher (17 June 1898 – 27 March 1972), usually referred to as M.C. Escher, was a Dutch-Frisian graphic artist. He is known for his often mathematically inspired woodcuts, lithographs, and mezzotints. These feature impossible constructions, explorations of infinity, architecture, and tessellations.

Some people would classify his art as surrealism, but to use any label at all is to minimize the uniqueness of his visual style.

2011 wall calendars are still available (while they last): 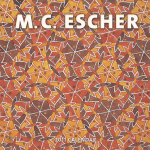 Intrigued by impossible geometries, dimensional inversions, and the tension between the flat and the spatial, M. C. Escher created drawings, prints, and paintings that employ strange but somehow logical manipulations of space and perspective. This compact wall calendar presents twelve classic examples of M. C. Escher’s graphic wizardry– among them Reptiles, Balcony, and House of Stairs.

M. C. Escher cultivated contradictions; the world of his art was a deliberate violation of reality, logic, and everyday expectations. Yet there is nothing chaotic in Escher’s imagery. A fish may mutate into a goose, stairs may climb at angles denounced by gravity, water may run uphill, but the clean, rational lines of these prints transcend the rules of the possible, achieving a logic beyond logic.

With no mathematical background, working on his own, Escher realized principles in his graphics that caught the attention of scientists working in crystallography—the audience that first began to make him famous. This calendar features twelve examples of Escher’s hypnotic works, which once surprised and delighted the world of mathematics.

It’s hard to say which is more awe-inspiring: Escher’s incredible drawing skill or his fast-and-loose roughhousing with reality. His fuddling Escher graphic – some calendars  bearing an excerpt from Escher’s writings and one of four alternating images.

Fans of Escher’s perplexing work will find the mini calendars perfect for squeezing into one of the dimensions of their life. Put it right next to the stream that flows uphill, or by the staircase up to the basement (or is that down to the attic?).