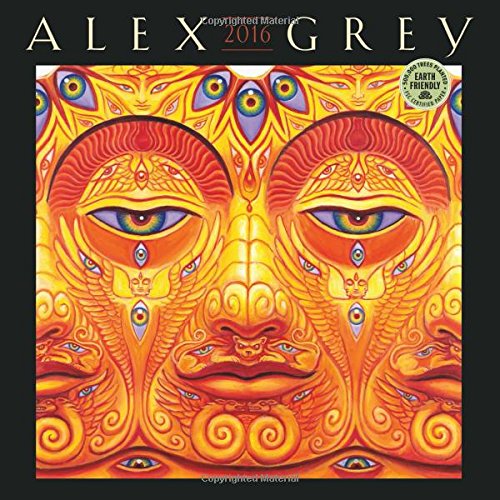 Alex Grey is an American artist specializing in spiritual and visionary art that is sometimes associated with the New Age movement. His calendar art has a psychedelic feel to it. As a Vajrayana Buddhism practitioner, his paintings reflect a consciousness of different states of awareness. The result is sometimes described as surrealism. 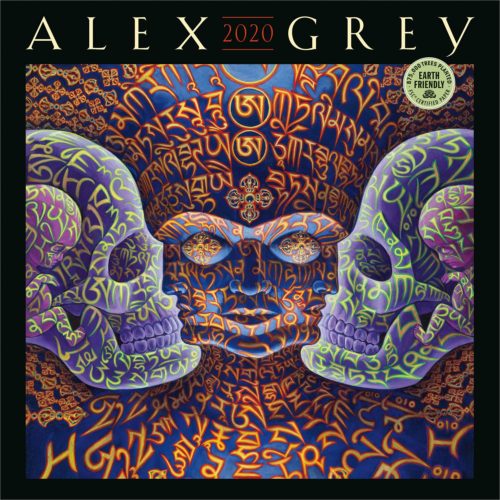 This wall calendar takes the viewer on both a graphic and visionary journey through the combination of physical, metaphysical and spiritual anatomy. Grey’s unique portrayals of man blend scientific images with depictions of universal life energy, enabling us to redefine both our world and ourselves.

Alex Grey is the author of Transfigurations, Sacred Mirrors and The Mission of Art. His work has graced several album covers and has been exhibited around the world.

In the world of alternative spirituality Grey has made his mark as a member of the Integral Institute, a member of the the board of advisors for the Center for Cognitive Liberty and Ethics, and as the Chair of Wisdom University’s Sacred Art Department. As if that wasn’t enough, he and his wife Allyson Grey are the co-founders of the Chapel of Sacred Mirrors, a non-profit institution supporting Visionary Culture in New York City.

Grey’s paintings can be described as a blend of sacred, visionary art and postmodern art. He is best known for his paintings of glowing anatomical human bodies, images that “x-ray” the multiple layers of reality. His art is a complex integration of body, mind, soul, and spirit. The Sacred Mirrors, a life-sized series of 21 paintings, took 10 years to complete, and examines in detail the physical and metaphysical anatomy of the individual.

Many of his paintings include detailed representations of the skeleton, nervous system, cardiovascular system, and lymphatic system. Grey applies this multidimensional perspective to paint the universal human experience. His figures are shown in positions such as praying, meditating, kissing, copulating, pregnancy, birth and death. His work incorporates many religious symbols, including auras, chakras, and icons with geometric shapes and tessellations in natural, industrial, and multicultural situations. Grey’s paintings are permeated with an intense and subtle light that is rare in art history.

Grey is a member of the Integral Institute. He is also on the board of advisors for the Center for Cognitive Liberty and Ethics, and is the Chair of Wisdom University’s Sacred Art Department. He and his wife Allyson Grey are the co-founders of the Chapel of Sacred Mirrors, a non-profit institution supporting Visionary Culture in New York City.

Every once in a great while an artist emerges who does more than simply reflect the social trends of the time. Today, a growing number of art critics, philosophers and spiritual seekers believe they have found that vision in the art of Alex Grey. Grey’s paintings take the viewer on a graphic, visionary journey through the physical, metaphysical and spiritual anatomy of the self. Grey’s portrayals of human beings blend scientific exactitude with depictions of universal life energy, leading us on the soul’s journey from material world encasement to recovery of our divinely illuminated core.

On wikipedia all it says about the spiritual background Of Alex Grey is that he is a Vajrayana practitioner and involved in integral spirituality. His website tells us a bit more. From a link list that is no longer available I found that he’s

After seeing this veritable catalog of new age interests, it’s a bit weird to read on wikipedia that his work is only ‘sometimes associated with new age’. Of course the term ‘new age’ is a bit controversial, but if it has any value at all, Alex Grey is right there in the middle of the action.

Unfortunately I can’t find the URL for the link page, or I’d have linked to it to prove this summary…