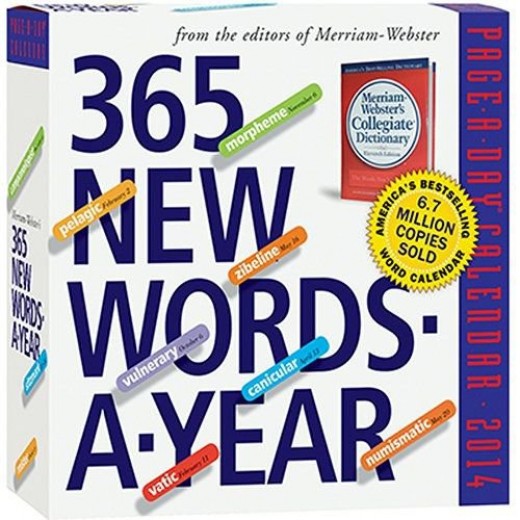 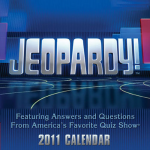 Jeopardy! is an American quiz show featuring trivia in topics such as history, literature, the arts, pop culture, science and sports. The show has a unique answer-and-question format in which contestants are presented with clues in the form of answers, and must give their responses in question form.

Spin off products like Jeopardy! Desk Calendars and board games are also popular pastimes at home: they’re a great way to keep your memory and mind in shape. Trivia lovers will be delighted with this desk calendar as a gift.

The show has a decades-long broadcast history in the United States since its creation by Merv Griffin in 1964. It first ran in the daytime on NBC from March 30, 1964 until January 3, 1975; concurrently ran in a weekly syndicated version from September 9, 1974 to September 5, 1975; and subsequently ran in a revival from October 2, 1978 to March 2, 1979. All of these versions were hosted by Art Fleming. Its most successful incarnation is the Alex Trebek hosted syndicated version, which has aired continuously since September 10, 1984, and has been adapted internationally.

Jeopardy! Desk Calendar: Jeopardy!? is the highest rated quiz show in the United States. Airing Monday-Friday, the show has gained a cult-like following among information buffs and game show fans.

Just like the hit TV show, the Jeopardy!? trivia quiz calendar also has a unique answer-and-question format. Each calendar week features Jeopardy! and Double Jeopardy! categories with assigned “dollar” amounts and a Final Jeopardy! round where players can wager all or part of their “winnings.” The answer is printed on the front of each page and the correct question is printed on the back.

The ten most fun and informative day to day trivia calendars

For those who love trivia, I’ve found you ten trivia desk calendars. They’re sometimes simply lists of facts, sometimes in the shape of quiz questions (with answers at the back of the page of course). Either way: they’re fun. 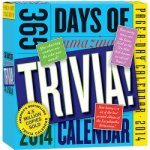 Facts Can Be Fascinating

I think it is pretty safe to say that since the days of man first beginning to have a language there have been at least part of the population that began to gather pieces of information that was not necessarily essential but interesting to know. Since the 1960s when groups of college kids started to share questions and answers about the culture that was popular at the time, more people enjoy games of trivia. Quiz shows are popular on television and games loaded with questions to answer are still favorites for families and friends to play.

Trivia calendars are often found in the desk calendar format which means that they are usually small square calendars that have a page to be torn off each day. They can be general in their nature covering several topics or they can be very specific to a topic.

The great thing about trivia is that it comes in general form but also on specific topics like sports, television, the weather and all sorts of other topics that you might want to know more about.

With a surprising and fascinating new factoid on every page, this perennially bestselling calendar keeps trivia buffs entertained all year long.

It’s the perennially bestselling calendar for anyone who loves testing their trivia chops with odd, unexpected, and fascinating factoids.

The perfect gift for students, crossword buffs, writers, wordsmiths, and language lovers. Every day, boost your vocabulary with a smart new word– including definition, pronunciation, sample sentence, and a detailed history. Here are hundreds of contemporary words (phishing), fun-to-say words (jackanapes), loans from other languages (schadenfreude), short, simple words (hew), and words that are a mouthful (bildungsroman). But every one is a good-to-know word.
From the editors at Merriam-Webster, America’s most respected dictionary.
Want to improve your vocabulary and learn fun and weird words daily? Then this is the desk calendar for you. 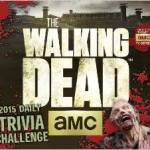 If you are a movie buff or watch a lot of television, a trivia calendar filled with fun facts about the big screen and small screen entertainment just might appeal to you the most. You might find questions about shows or movies that flopped, scandals of the industry and all kinds of other facts that are not essential to your daily life but still fun to know. You never know, it could end up being a question that you have the answer to while playing a game with your family or friends. 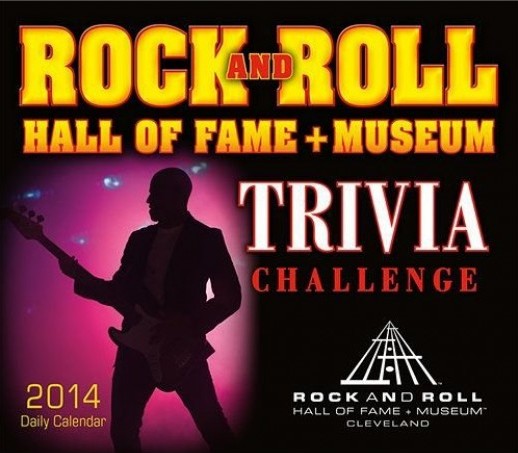 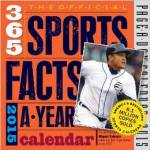 Test your knowledge about the rock and roll music that changed the world– with this daily calendar. This fascinating collection of music trivia from the Rock and Roll Hall of Fame will entertain you all year long.

Test your knowledge about the rock and roll music that changed the world with this daily calendar. This fascinating collection of music trivia from the Rock and Roll Hall of Fame will entertain you all year long.

You may be fascinated with the world of sports or an avid fan of a specific one. There are a variety of calendars that can fill your head with facts about many of the games that people play. It might be the great American pastime of baseball or about the game of golf. Calendars for football, fishing and other sports can often be found.

As essential to the fan as the daily sports page, 365 Sports Facts-A-Year brings on the rivalries, the camaraderie, the excitement of game day, and the thrill of cheering on your favorite team.
Every day, relive a pivotal play, no-holds-barred battle, or history-making event. In his last U.S. Open appearance, Agassi rallies from two sets down to defeat James Blake in an epic five-set quarterfinal. The Steelers pull away from the Rams to take Super Bowl XIV– and become the first-ever four-time winners.
If you’re into sports of all kinds, this is the calendar for you. From baseball to football – the all American trivia desk calendar.

Packed with the rivalries, the upsets, the history-making bouts, the sheer joy of sitting in the stands and cheering on your team, 365 Sports Facts-A-Year feeds the obsession of sports fans all year long. 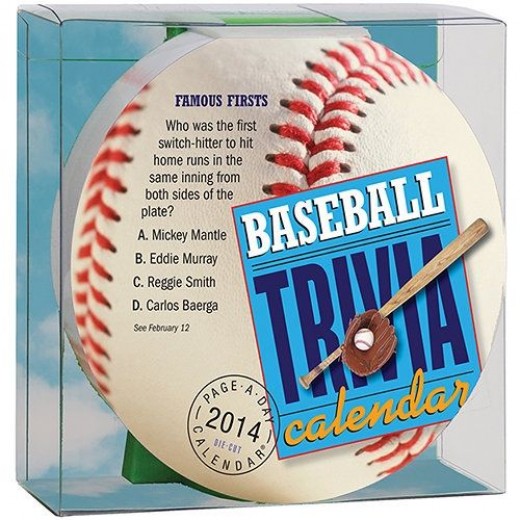 For true-blue fans, Baseball Trivia is the baseball-shaped calendar that brings the players, the teams, the stats, and the sheer obsession to every day of the year. The facts, the records, the stats, the stars. Die-cut into the shape of a baseball, the Baseball Trivia Calendar captures all the obsession and sheer pleasure of the game.

Unbeatable Baseball Records. World Series Q&A: Who is the only player to win the World Series MVP twice? Plus Baseball By the Numbers, Historical Oddities, and Did You Know? In baseball’s “Centennial Year” in 1969, what players were chosen as the Greatest Player Ever and the Greatest Living Player? 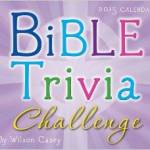 You can be well versed on the Bible

With a Bible trivia calendar you can learn the who, what , when and where of the Bible. Facts that come from both the Old Testament and the New Testament are gathered together for an interesting way to be better informed about the stories and characters of this holy book. Find the answers to questions like what Sarah lied to God about. Where was Samson imprisoned? A very good reference for one who wants to study the Bible. 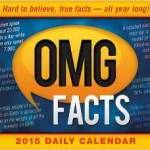 We are never too old to learn something new

I love this colorful calendar full of information that some might deem useless! The pages are in bright and interesting colors and each has a quirky little doodle along with a fact for the day. We might find out that the inventor of the electric chair was a dentist, what the length of the longest carrot is or even how much carbon we have in our bodies. There are facts that will amaze you, amuse you and add to the part of your brain that stores all of these pieces of information that crop up from time to time whether we want them to or not.

Find yourself exclaiming OMG! every single day of the year with this factoid calendar that gives some really different pieces of trivia. Find out things like what happens when you bite down on a Wint-O-Green life saver in the dark. It will make you say OMG!. Did you know that a human could actually crawl through arteries of a blue whale’s heart? Yep, it is that big! How many times did Jackie Chan do retakes for a single shot? Find out with this desk calendar.
To show you just how interesting these types of facts are. There are over 8 million visits a month to the website that is dedicated to OMG facts. Now you can be in the “know” every single day.

Gain Trivial Knowledge While Keeping Track Of Your Time

While keeping your days, weeks and months organized you can also add a piece of trivium (singular of trivia) to your mind’s database with a Fun Facts Trivia calendar each day. Now, we both know that this type of calendar is not for everyone, but if you are like me and love to add to your knowledge base of information about all kinds of topics these calendars are perfect for you and me.

The fun thing is that we can choose one that has general facts in a variety of different topics that may seem trivial to part of the world’s population. We know that having these little tidbits of information help us to always have something to talk about at parties and gatherings. Don’t we?

Collectors of antiques and memorabilia will often pick a trivia calendar that is specific to the items that they have a passion for. There are calendars that have facts for the train enthusiast, movie buffs and all kinds of pieces of nostalgia. If a person wants a different way to study the bible, they can even find a few different trivia calendars that have verses in trivia form.