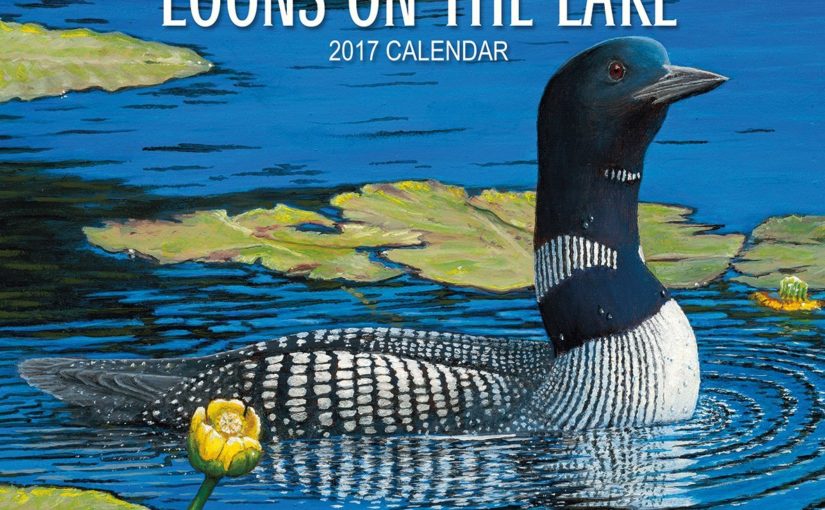 The loons (North America) or divers (UK/Ireland) are a group of aquatic birds found in many parts of North America and northern Eurasia (Europe, Asia and debatably Africa).

Loons on the Lake Wall Calendar

The loon, the size of a large duck or small goose, resembles these birds in shape when swimming. Like ducks and geese but unlike coots (which are Rallidae) and grebes (Podicipedidae), the loon’s toes are connected by webbing. The bird may be confused with cormorants (Phalacrocoracidae), not too distant relatives of divers and like them are heavy set birds whose bellies – unlike those of ducks and geese – are submerged when swimming. Flying loons resemble a plump goose with a seagull’s wings, relatively small in proportion to the bulky body. The bird holds its head pointing slightly upwards during swimming, but less so than cormorants do. In flight the head droops more than in similar aquatic birds.

Loons are excellent swimmers, using their feet to propel themselves above and under water while their wings provide assistance. Because their feet are far back on the body, loons are poorly adapted to moving on land, and usually avoid going onto land, except when nesting.
All loons are decent fliers, though the larger species have some difficulty taking off and thus must swim into the wind to pick up enough velocity to become airborne. Only the Red-throated Diver (G. stellata) can take off from land. Once airborne, their considerable stamina allows them to migrate long distances southwards in winter, where they reside in coastal waters. Loons can live as long as 30 years.

More about loons:
The Common Loon is the provincial bird of Ontario and is depicted on the Canadian one-dollar coin, which has come to be known affectionately as the “loonie”.
It is also the official state bird of Minnesota.
Mercer, Wisconsin promotes itself as the “Loon Capital of the World”.
Shirley the Loon is a cartoon character from Tiny Toon Adventures.