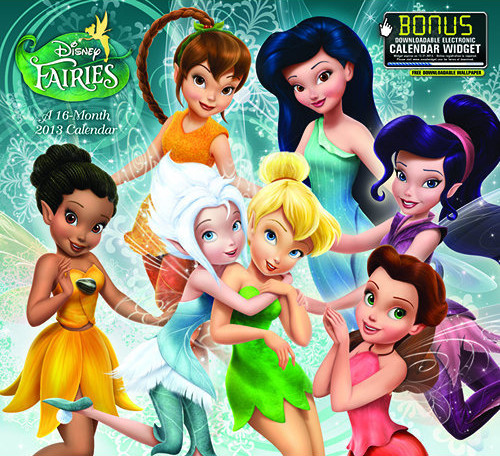 Most publishers aren’t this forward, but Disney have already brought out the Disney Fairies Wall Calendars! Grab one as a Christmas or anytime gift. Saves you shopping later!

Disney Fairies Wall Calendar
Released to coincide with the popular release of Secret of the Wings movie, the 4th film in Disney’s enormously popular Fairies franchise, starring Tinker Bell. Notice the fairies of Disneyland have an updated look! One of the most loved and recognizable Disney brands, the Fairies live in a world full of pixie-dust magic.

You don’t need faith, trust, and pixie dust to share every day with Tinker Bell and her friends. They’re all included here – Sil, Rosetta, Dess, Fawn, even Vidia–on the daily pages of the Disney Fairies Mini Calendar sure to make 2014 the most magical year yet, since the theme is Pirate Fairies.

“Laughter is timeless…Imagination has no age…and dreams are forever.”

Tinker Bell Wall Calendar
This 16 month Tinker Bell Calendar runs from August through December the next year and Tink is flying high on a new wave of popularity thanks to the Disney Fairies franchise.

Don’t you just love the new and modern styled illustrations of the Fairies?

Tinker Bell is everyone’s favorite fairy and is now the star of her very own calendar! The diminutive and just-a-bit flirtatious Tinker Bell is surrounded by magical color in a playful calendar, with date pads just large enough to record your own magic.

Tinker Bell is surrounded by magical color in this playfully flittery calendar perfectly sized for hanging on the wall of your choice be it a little girl’s room or anywhere.

Take a fantastic flight on fairy wings as Tinker Bell and her friends Silvermist, Rosetta, Fawn, Iridessa and Vidia show you around their secretive and mythological home, Pixie Hollow.