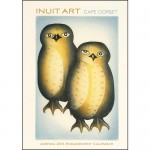 Not many planners are created with Native American spirituality in mind. However, I do think you’ll like these two. Shown above and on the left is the Inuit Art Planner  it showcases the beautiful lines and personality of Inuit artists today. I think it looks great: that simple style looks very modern and yet alive. It’s a good reminder that one of the inspirations for modern art was aboriginal art from all continents.

The artists are from a family of Inuit artists working on Baffin Island, about 1,200 miles north of Toronto Canada. I probably need not remind you that the Inuit are a native american tribe, which used to also be known as Eskimo’s. 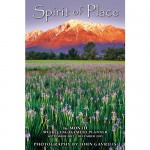 Spirit of Place planner is a more general spiritual calendar featuring nature photography that any pagan or Native American is likely to love.

Calendars Celebrate The History And Culture Of Native Americans

Calendars, date books and planners that celebrate the history and culture of Native Americans often feature black and white pictures of these people in the days when they still lived somewhat like their ancestors had. I hope you enjoy. I did also find a few calendars that show how Native American Spirituality is still relevant today.

In the United States the term Native American refers to the indigenous peoples and their descendants who inhabited the Americas thousands of years before the Europeans discovered the continents of North and South America. Scientists can not agree to how long these different cultures had resided on the continents but it would appear that it is agreed that it has been longer than 12,000 years.

History buffs and people who have an interest in the tribal traditions and spirituality of the Native Americans will surely find a calendar or planner with this theme as something they will enjoy using to organize their daily lives. There are more than just a few options when it comes to a Native American themed calendar. You or the person you are going to gift with a calendar might enjoy antique photographs of the tribal traditions of the 19th century. There are also options with art from a variety of artists either showing the spirituality of the First Peoples or interpretations of their lives. You will find that there is a calendar or planner that will fit just about anyone’s interest in Native Americans. 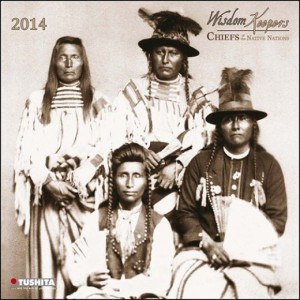 As the art of photography grew there were a number of early photographers who made it their life’s mission to record the history and customs of the Native Americans in both the United States and Canada. Men like Edward S. Curtis, John C H Grabill, and others used their cameras to document the tribal traditions and people during the late 19th century and early 20th century. What many of these men had in common was the desire to show a way of life that they could see was rapidly coming to an end. Fortunately for us, their images have been preserved and now we can view them in the form of calendars. 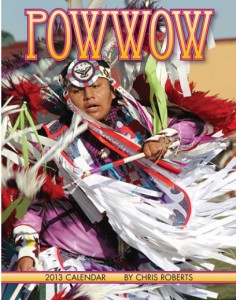 Photographer Chris Roberts shares contemporary photos of the Powwows of this century. The tribes of the Plains began meeting in the 1800s to celebrate their rich heritage and to hold on to some of the traditions of the old ways. Today, Powwows concentrate on spiritual teachings and competitive dancing. Each photo shows the energy of the dancer as he or she carries on the traditions of their ancestors. A 16 month wall calendar measuring 10.75 inches by 13.75 inches.

The spirituality of Native Americans can vary from each tribal tradition with different creation stories and differences in practices of their faith. It is safe to say that all are very much nature based with a strong connection to the Earth. Some would call it Pagan, although that is not exactly correct. Others would call it Shamanism which is closer but not all traditions had a Shaman to direct them. 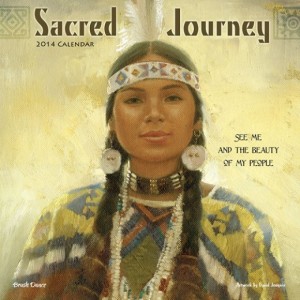 The paintings included in this 12 month calendar will speak to your soul. Artist David Joaquin captures the very spirit of Native Spirituality in his work. The wall calendar measures 12 by 24 inches when hanging on a wall and covers a 12 month time span. 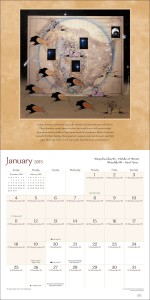 The artwork of Jim Yellowhawk is further enhanced each month with a traditional Lakota virtue written by Joseph M Marshall III. You will find yourself walking down the “good red road” of wisdom as the months go by. The Lakota are one of the bands of the Sioux Nation. The calendar spans 12 months with the images plus a bonus of 24 months to help for future organizing. It is a standard wall calendar measuring 12 by 12 inches when closed.

In the 1800s the Ghost Dance was a different religion that swept across the country encompassing many tribal traditions. The message of of hope and resurrection at a time when many Native tribes faced destruction. J. D. Challenger captures the spirit of this religion with his beautiful and colorful art. The massacre at Wounded Knee in 1890 was a result of the whites misunderstanding the religion. This wall calendar gives honor to the strength and dignity of the Native Americans and their rich history.

Susan Seddon Boulet shows her fascination with Shamanism throughout her lifetime in the artwork that is featured in this wall calendar for the upcoming year. Some ancient and modern indigenous religions use a Shaman as an intermediary between the physical world and the spirit world to bring healing to an individual or the community as a whole.